It has been a doozy of a week in the news out of — and into — Rome, and it isn’t even over. Let’s recap the dizzying array of stories since Monday (many of which have ties to older, long-percolating and still-developing ones):


That, in roughly chronological order, gets us to about noon on Thursday, September 13th, 2018 — the hour at which a meeting of Pope Francis and the leadership of the US Conference of Catholic Bishops was scheduled to begin. It’s been rough going for those men, too:

USCCB President, Cardinal Daniel DiNardo of Galveston-Houston (news broke Wednesday of a seriously mishandled clerical abuse case in his diocese, and partly on his watch);


Cardinal DiNardo, Archbishop Gomez, and Msgr. Bransfield were joined by the President of the Pontifical Commission for the Protection of Minors, Cardinal Sean O’Malley, OFM Cap., of Boston:

Cardinal O’Malley has promised to do better, after admitting he ignored a 2015 letter from Fr. Boniface Ramsey, OP, regarding McCarrick, but still has not explained what happened to another 2015 letter from victim-advocate Juan Carlos Cruz;

A statement from the USCCB described the meeting as “lengthy, fruitful and good,” but offered no details and strongly suggested no decisions had been taken. “We look forward to actively continuing our discernment together,” the statement said, “identifying the most effective next steps.”

The USCCB statement also said Francis “listened very deeply, from the heart.” Apparently, Francis could not bring himself to authorize an investigation into the role in the Church of the man, who is credibly alleged — quite apart from the “testimony” of the former nuncio, Archbishop Carlo Maria Viganò — to have corrupted and abused seminarians and priests, and raped children — and who cannot be trusted not to have agents and sympathizers within the US Church hierarchy and clerical ranks.

The now-embattled USCCB president, Cardinal DiNardo, called for a Vatican investigation into the McCarrick debacle — and presumably into related questions — on August 16th, and repeated his call on August 27th, in concert with the Executive Committee of the Conference. In both statements, Cardinal DiNardo announced his intention to bring the issues to the Holy Father, in person. The Vatican only announced the pope’s meeting with the USCCB leadership two days ago.

The Vatican newspaper, L’Osservatore Romano, however, did release this photograph, which was taken at the meeting: 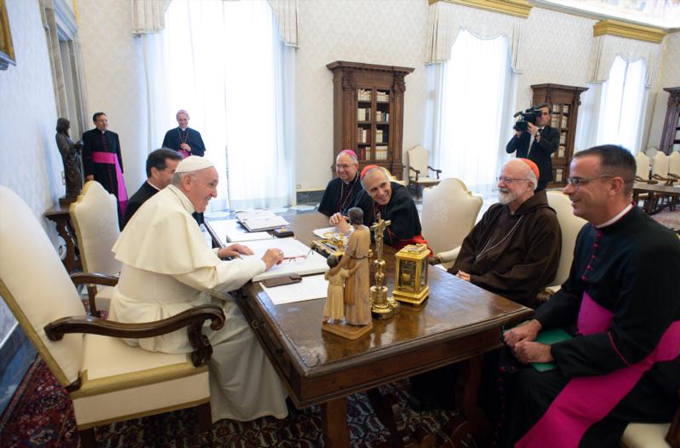 One ought to be glad they’re all able to see the lighter side of all this, even if the mirth eludes the rest of us.