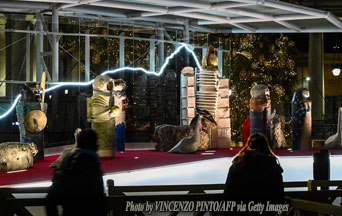 Christmas festivities would not be complete without the Nativity scene, which reminds us of the great grace received by humanity: the birth of Christ, true God and true Man.

It was Saint Francis of Assisi who put together the first Manger scene for Christmas, 1223, in the village of Greccio, in the Lazio region of Italy: The newborn Child Jesus lying in a crib, among animals, being adored by His Blessed Mother and Saint Joseph, and later by the shepherds and Magi while choirs of Angels sang, as Saint Luke describes in his Gospel.

The saint’s first biographer, Thomas of Celano, tells us that Saint Francis was so devoted to the central mysteries of our salvation, especially the Incarnation, and that he thought of nothing else:

And chiefly did the humility of the Incarnation and the charity of the Passion so occupy his memory that he would scarce ponder over anything else. Therefore that which he did at the fortress called Greccio on the birthday of our Lord Jesus Christ in the third year before the day of his glorious decease is to be recorded and dwelt on with reverent memory.1

Saint Francis then asked the city’s lord, John of Veletri, to find a cave for him and provide what was necessary for the Christmas scene. The nobleman, who was very pious and devoted to the saint, prepared everything he was asked for: the grotto, the animals, and the representative statues.

There Simplicity was honored, Poverty exalted, Humility commended; and of Greccio there was made as it were a new Bethlehem. The night was lit up as the day, and was delightful to men and beasts. The people came, and at the new Mystery rejoiced with new rejoicing. The woodland rang with voices, the rocks made answer to the jubilant throng. The brethren sang, yielding due praises to the Lord, and all that night resounded with jubilation. The Saint of God stood before the manger, full of sighs, overcome with tenderness and filled with wondrous joy. The solemnities of Mass were celebrated over the manger, and the priest enjoyed a new consolation.2

Saint Francis of Assisi placed all of the sweetness of his faith-filled soul in that Nativity display. He was delighted by the birth of the Child Jesus, the tenderness of the Virgin Mother, and the greatness of the Patriarch Saint Joseph, who, ecstatic, contemplated the Word that had become Flesh.

Since that trailblazing first time, the Nativity scene has been present in Christendom’s churches—be these humble chapels, parish churches, cathedrals, or basilicas. Among them is St. Peter’s Basilica, in Rome, the sacred edifice that most represents the Church.

Saint Francis’s brainchild became so much a part of Christmas that one does not understand how the Nativity scene could be missing during the year’s most sublime night—when the world’s darkness is illuminated by the lumen Christi. How many graces were poured out, how many consolations and joys flowed from the sublime love of that great saint, Saint Francis of Assisi, through the Christmas crib! The Manger scene became one of the most beloved devotions of the faithful. In Catholic homes, families gathered around a Nativity set, however modest, to pray. The custom gave rise to artistic renditions, of which those from Naples became the most famous, even today.

Centuries passed, and the Church had alternating periods of fervor and crisis until we reached these sad days.

Some decades ago, militant secularists started the war on Christmas. Nativity sets on public property came under attack as these leftists tried to impose their atheism on society. They have been seconded in their efforts by socialists whose preferential option for revolt and class struggle is in total opposition to the Gospel’s “peace on earth to men of goodwill” (Luke 2:14) and social harmony among classes.

The attacks on Christmas turned apocalyptic, however, when progressives inside the Church joined forces with secularists and socialists. Unfortunately, instead of remembering the beauty, sweetness, and peace of the Savior’s birth, certain Nativity scenes have come to represent ugliness, even the exaltation of vice. Although set up by Catholics on Church property, these Nativity sets are not at all Catholic.

That was precisely the case of the Nativity scene displayed in St. Peter’s Square for Christmas 2017. The desecration of Christmas inside the Church took a bold leap forward: This large Vatican Manger scene highlighted a full-size figure of a completely naked man, lying down in a languid and provocative pose.

Commenting on this 2017 “Nativity scene,” Vaticanist Aldo Maria Valli stated that “the naked man imposes himself on everything,” being “in the very foreground, rosy, shapely, shaved, and with all muscles well designed.” In this Nativity scene, he concluded, “Joseph and Mary look almost like two intruders who happened to be there.”3 Unsurprisingly, the homosexual movement praised that monstrous Crib presentation. Leftist as it is, Facebook banned photos of this Vatican Manger scene as “sexually provocative.”4

In 2020, following last year’s veneration of the Pachamama idol in the Vatican gardens and, later, inside St. Peter’s Basilica itself, what could be expected as the Nativity scene in St. Peter’s Square?

Instead of the sacred persons of Mary, Joseph, and the Child Jesus, 2020’s Vatican Nativity scene presents figures for public veneration that can only be described as pagan idols. 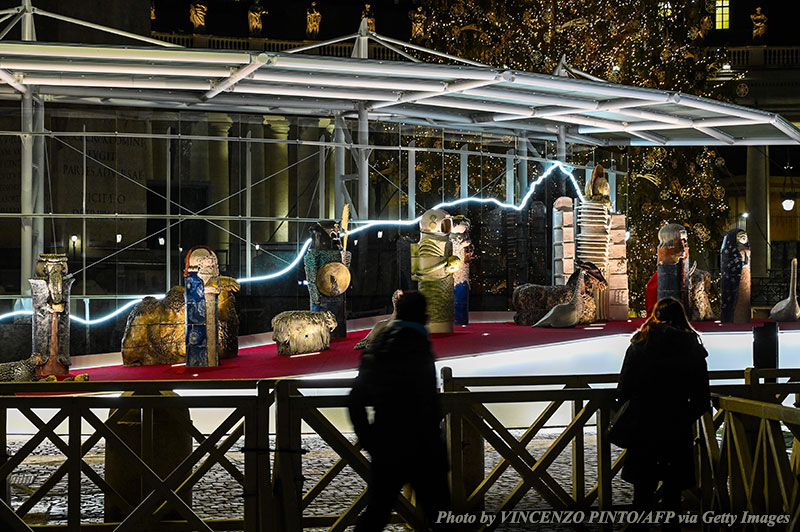 The Vatican Nativity scene presents figures for public veneration that can only be described as pagan idols.
(Photo by VINCENZO PINTO/AFP via Getty Images)

Writing for London’s Catholic Herald, on December 13, 2020, Joe Grabowski observed: “This year’s Vatican crèche has been laughed at and ridiculed for looking like a science fiction story or children’s toys. One figure was often described as looking like Darth Vader [a character in the Star Wars movie franchise], though to me, he looks more like a Sontaran from Doctor Who [a British science-fiction TV program]. More excitable people called it demonic, pagan, and idolatrous.”6

For his part, Edward Pentin comments in The Catholic Register: “The Christmas presepio in St. Peter’s Square contains 20 modernistic ceramic objects, including the main figures in the story of the Nativity but with toy-like faces alongside the presence of an astronaut and a morbid, satanic-looking executioner — but no manger.” He goes on to say that the “[r]eaction on social media and elsewhere has mostly ranged from ‘hideous,’ ‘abhorrent’ and a ‘disgrace,’ to ‘demonic,’ an ‘embarrassment’ and a ‘mockery’ of Christ’s birth.”7

What would the great Saint Francis think of this? What would he think of this namesake pope who allows a Nativity scene that is the opposite of what he designed in his fiery faith to display the innocence of the first Christmas? How Pope Francis and Saint Francis of Assisi conceive the King of the Universe, the Prince of Peace, clearly shows how far apart they are, spiritually.

Let us ask the Seraphic Father of the Franciscan Order to give us his love for the Child Jesus and the burning indignation he would have seeing the abomination on display in St. Peter’s Square.