The China-Vatican Accord Is Secret Only in its Actual Words. Here’s How It Works 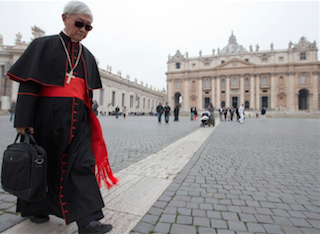 > All the articles of Settimo Cielo in English

About the accord signed on September 22 between the Vatican and China, it has been said only that it concerns the appointment of bishops. Its contents have been kept secret. But from then until now so many things have happened that it has become all too clear how it works.

Cardinal Zen Ze-kiun (in the photo), 88, made a special trip from Hong Kong to Rome to personally deliver to Pope Francis an impassioned seven-page letter of appeal on the dramatic situation into which the “underground,” or clandestine, Church in China has been plunged after the accord.

While for the other part of the Chinese Church, the official side recognized by the authorities of Beijing, everything seems to be going the regime’s way.

The last seven bishops imposed by force against the will of Rome have also been recognized by the pope, who has set them free from the excommunication activated at the moment of their illegitimate ordination, in spite of the absence of any public request for forgiveness by them and the fact that two of them have lovers and children. Pope Francis has even stooped to lifting the excommunication from an eighth bishop appointed by the government alone, who passed away in January of 2017 but whom Beijing wanted to see rehabilitated at all costs.

Moreover, the pope has had to swallow the sending to Rome of none other than one of the seven formerly excommunicated bishops, Guo Jincai, as a delegate of the Chinese Church at the worldwide synod held in October. The announcement that he would be sent was made first by the Chinese authorities, and only afterward did the pope include him on his guest list.

Guo Jincai has been for years a perfect man of the regime. He is a member of the People’s Assembly, the Chinese parliament, promoted to this role by the central department of the Communist party, and is secretary general and vice-president of the Council of Chinese Bishops, the pseudo episcopal conference, until recently never recognized by Rome, made up only of bishops officially recognized by the government, which now according to the agreement will be responsible for providing the pope with the name of every future bishop, selected beforehand in a “democratic” vote by representatives of the respective dioceses, all of them in turn designated and trained by officials of the Communist party.

Pressed by journalists after the news of the accord with China, Francis saidthat in any case it will still be the pope who has the last word.

But from what has happened so far, it turns out that the ones to “speak” have been always and only the Chinese authorities, with the pope limiting himself to saying “yes” every time. Perhaps even anticipating the wishes of the other side, as happened with the Holy See’s erection of the new diocese of Chengde, announced on the same day as the signing of the accord, without any explanation for it being given.

The reason became clear shortly afterward, with the assignment of this new diocese to none other than Guo Jincai, the regime’s emissary to the synod. The boundaries of this and 96 other new dioceses were drawn, years ago, by the Chinese authorities, on their own unilateral initiative, retracing the boundaries of the provinces and feeding to the shredder the 137 dioceses of the Vatican map. The Holy See had never accepted this. But now Pope Francis has taken the first step. And that will result, given the reduction in the number of dioceses, in the gradual exclusion of the roughly thirty clandestine bishops.

Upon whom the pressure of the regime became, after the signing of the accord, even heavier.

Some of them have already given in, like the bishop of Lanzhou, Han Zhihai,whose act of submission coincided with his promotion as president of the local Chinese Patriotic Catholic Association, the historical instrument for the regime’s control over the Church, which until just recently the Holy See always judged as “irreconcilable” with Catholic doctrine, but in which all the official bishops are required to enroll.

While others remain defiant, like the bishop of Wenzhou, Shao Zhumin, who was detained by police in mid-November for yet another useless round of indoctrination in an undisclosed location. It is the fifth time in the last two years that the Chinese authorities have arrested him, to the point that in June of 2017 even the German embassy in Beijing protested publicly in his defense.

It is to this Church of resistance that Cardinal Zen has given voice, in his appeal to Francis, so that it may not feel abandoned by Rome.

This commentary was published in "L'Espresso" no. 51 of 2018 on newsstands December 16, on the opinion page entitled "Settimo Cielo" entrusted to Sandro Magister.

Here is the index of all the previous commentaries:

The commentary had already been printed in l’Espresso when further newscame that confirms it in full.

At the Diaoyutai hotel in Beijing that the Chinese state reserves for its own guests, Vatican envoy Claudio Maria Celli confirmed the transfer of mandate, as head of the diocese of Mindong, from “underground” bishop Vincent Guo Xijin to the “official” one, Vincent Zhan Silu, one of the seven whom Pope Francis exonerated from excommunication on the day of the signing of the accord.

From now on, Guo Xijin will figure only as an auxiliary for the new ordinary of the diocese.

At the same time, in the other diocese of Shantou, the elderly “underground” bishop Peter Zhuang Jianjian retired and installed in his place was the “official” bishop Joseph Huang Bingzhang, another of the seven who were formerly excommunicated.

Both Zhan Silu and Huang Bingzhang are also vice-presidents of the pseudo episcopal conference set up by the Chinese authorities.

Already one year ago Archbishop Celli had gone to Beijing to obtain this twofold replacement, in spite of the fact that the two bishops now promoted were still excommunicated at the time. But he had met with strong resistance, which Cardinal Zen had taken pains even then to make known to Pope Francis. In seeking to convince the two “underground” bishops, Celli had said that the pope himself was asking for this step backward, “because otherwise the accord between China and the Vatican cannot be signed.”

Now the accord is in place and the operation has made its landing. Everything holds together.