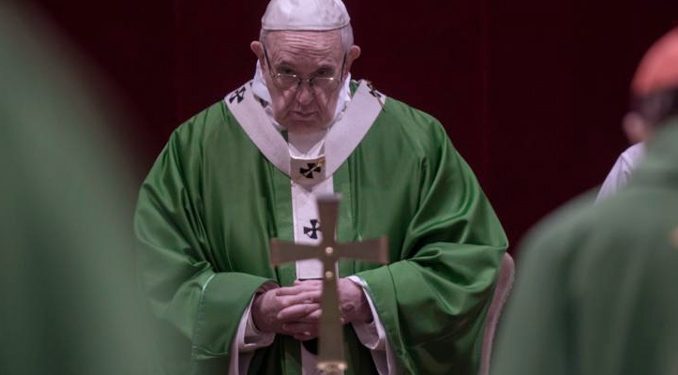 Pope Francis celebrates a Mass attended by the heads of bishops' conferences from around the world on the last day of the four-day meeting on the protection of minors in the church at the Vatican Feb. 24, 2019. (CNS photo/Maria Grazia Picciarella)

Officially styled, “Meeting on the Protection of Minors in the Church”, the four days saw organizers and participants describe it variously as a “journey of exploration” — by Archbishop Mark Coleridge of Brisbane — a “pilgrimage” — by Archbishop Charles Scicluna of Malta — as almost anything except as what it was supposed to be: a business meeting at which senior leadership would be officially appraised of an urgent crisis, the head man would put them on notice, and the stakeholders would be given not vague assurances, but real undertakings against which progress in the address and remedy of the crisis could be measured.

Instead, many of the talks explicitly treated their assigned aspect of the problem as something else: Responsibility as awareness — especially self-awareness and particularly of one’s own woundedness — from Cardinal Luis Antonio Tagle of Manila, on Day One; Accountability as collegiality (and synodality) on Day 2; Transparency as “traceability”, Cardinal Reinhard Marx on Day 3.

Cardinal Marx addressed the theme of transparency in the threefold key of reliability — or “traceability” in his word — comprehensibility, and administration: transparency, in other words, means well-managed information — and good management of information means effective sharing of it. He did offer four practical measures: a re-thinking of pontifical secrecy; transparent norms for the Church’s judicial processes; publication of abuse statistics; and finally, the publication of judicial proceedings.

There was also talk over the four days, of clarifying and strengthening a legal instrument Pope Francis introduced and has apparently been somewhat reluctant to use: As a loving mother, which makes negligence, especially in matters of child protection, grounds for removal from office. Despite that talk, and Cardinal Marx’s proposals notwithstanding, there was very little discernible interest in adopting means of making bishops directly accountable to the faithful.

Doing that — i.e. finding ways to give the laity a responsible role in structures of accountability — would require searching study of Church history and a kind of “out of the box” thinking, for which the participant Churchmen rarely showed interest or ability. The archbishop of Chicago, Cardinal Blase Cupich, said, “We must unswervingly incorporate broad lay participation into every effort to identify and construct structures of accountability for the prevention of clergy sexual abuse.” In a footnote — he urged readers to pay attention to the footnotes — he nevertheless reminded his readers:

It is recognized that lay professionals with specialized knowledge may be duly authorized to carry out an investigation, but all investigations must remain under the appropriate ecclesiastical authority. See e.g., CIC, c. 274 §1 (“Only clerics can obtain offices the exercise of which requires the power of order or the power of ecclesiastical governance.”); see also CIC, cc. 1405, 1717. This, however, does not impede the rights and duties of the laity in making their opinion known to the pastors and the rest of the Christian faithful on matters which pertain to the good of the Church, cf., CIC, c. 212 §3.

Accountability was the broad theme on Day 2 of the meeting, for which an address by the archbishop of Mumbai, Cardinal Oswald Gracias, set the tone, as CWR reported:

The focus was on accountability: primarily — not to say, almost exclusively — on bishops’ accountability to each other. “As we take up our collegial and collective sense of accountability and responsibility,” the archbishop of Mumbai, Cardinal Oswald Gracias, said in the Friday morning address that introduced the theme for the day, “we will inevitably encounter a certain dialectic. For our collegiality does indeed express the variety and universality of the People of God, but also the unity of the flock of Christ.”

“It cannot be disregarded that dealing with the topic of abuse in the right way has been difficult for us in the Church,” said Cardinal Gracias, “for various reasons,” though he left largely unexplored the differences in the ways in which the abuse crisis has been difficult for bishops, whose failures enable abusers, and for victims, who are gravely and irreparably harmed and injured by the abuse the bishops have enabled by their failures of governance.

“We as bishops also bear responsibility for this,” Cardinal Gracias went on to say. “For me, this raises the question: do we really engage in an open conversation and point out honestly to our brother bishops or priests when we notice problematic behavior in them?” he asked. “We should cultivate a culture of correctio fraterna, which enables this without offending each other, and at the same time recognize criticism from a brother as an opportunity to better fulfill our tasks.”

Abuse survivor and victim-advocate Virginia Saldanha, who was in Rome during the meeting at the invitation of the Ending Clergy Abuse group and participated in numerous panels and events around the meeting, told Catholic World Report, “On reading his address I wondered whether he got mixed up with collegiality,” which, she said, “is more about bishops supporting each other through the crisis as ‘brothers’ in the ‘old boys club’, and accountability — which is his responsibility to be answerable regarding abusive priests under his care — to his people in the diocese.”

Saldanha has been an outspoken critic of Cardinal Gracias, who is accused of mishandling abuse in the Archdiocese of Bombay. The BBC recently reported on a case from 2015, in response to which the archdiocese issued a statement defending Cardinal Gracias’ handling of the matter.

“I had questioned Cardinal Oswald Gracias’ position on the organizing team of the summit back in November 2018, coming from my own experience of his handling abuse cases in his own diocese, to which I belong as well,” Saldanha said.

Saldanha also said there were portions of Cardinal Gracias’ address she found encouraging. The fourth point made at the end is a summons to courage, she said, “and is heartening to read: “[B]e willing to pay the price of following God’s Will in uncertain and painful circumstances.’ I hope it will be pursued in faith and sincerity.”

About Christopher R. Altieri  85 Articles
Christopher R. Altieri is a journalist, writer, and editor based in Rome, Italy. He spent more than a dozen years on the news desk at Vatican Radio. He holds the PhD from the Pontifical Gregorian University, and is the author of The Soul of a Nation: America as a Tradition of Inquiry and Nationhood.
Gửi ý kiến của bạn
BÀI MỚI NHẤT